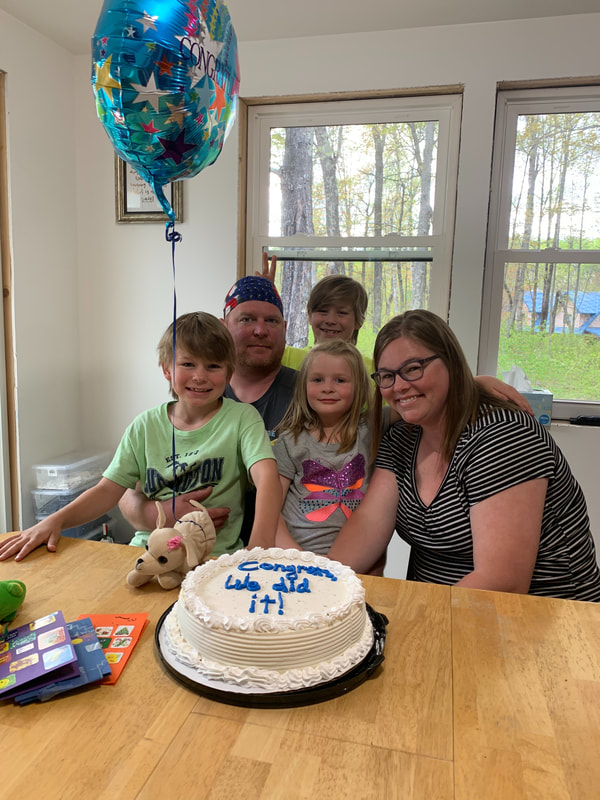 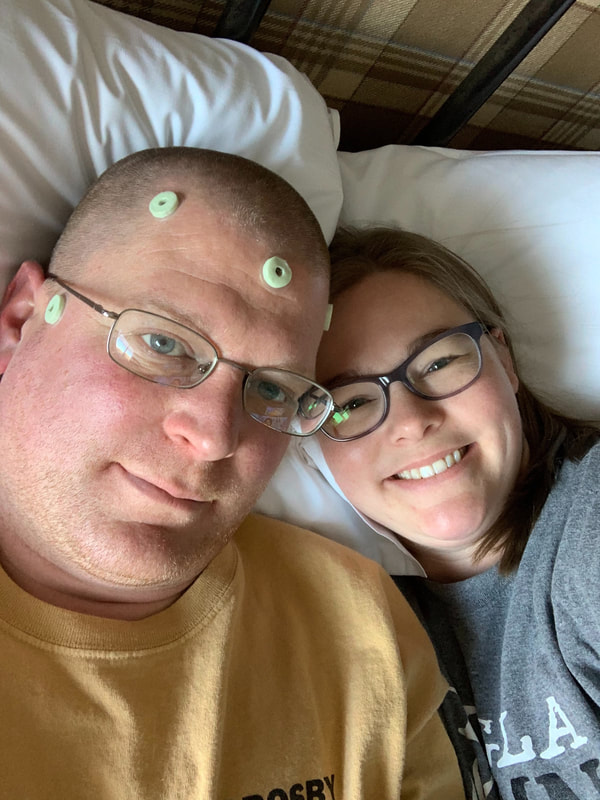 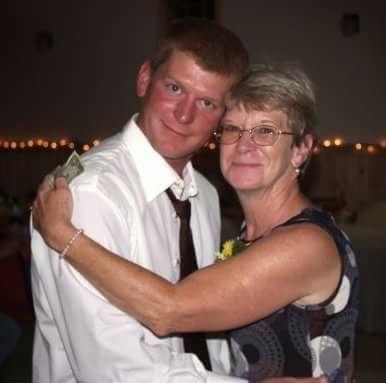 Justin woke up on February 25th at 3am having a seizure. He remembers the whole thing until he passed out. I woke up from him shaking the bed thinking he was having a night terrors until I heard that dreaded mouth noise. At first, I was trying to decide if I call 911 or wait it out.
Well, I’m glad I made the call.   I was on the phone with 911 operator and was explaining what was going on. Meanwhile, Justin went from a beet red face to black and then blue. He had bit his tongue, but thankfully not all the way through. It took Justin 45 minutes to wake up from his seizure. Thankfully our children did not wake up to any of this, even though the dogs were barking. I had called my brother-in-law and told them what happened and they sped right over.  While we waited, Justin was wanting the Dr. to hurry up because he had to get to work (typical of him).  That changed when the ER Dr. came in and said they had found a mass in Justin's brain on the first MRI.

Word spreads fast in a small community and messages were coming in by the dozens with support and questions. My brother in law did an amazing job taking care of the kids.  Honestly, the kids took that man in circles.  He was listening to the kids on where to turn for school and they told him to follow that bus.  Well, needless to say they brought him into the bus loop.  Never a dull moment when it comes to hanging out with uncle.

At this time, the ER physician did another MRI scan with contrast to send down to Abbott Northwest. While waiting for the rest of the results in the ER Justin said to me “I am not ready to go”. We stayed down in Abbott for a couple of days to get a grip on the reality of the situation. The day before surgery, they took Justin and had to do a special MRI scan to locate exactly where the tumor was.  They had to mark his head with sticky foam Cheerios on his head to make sure they had everything in the right place.  It was great because our friend Davie was down hanging out with Justin and bringing anything we may have left at home.  Tanya, Davies wife was taking care of the kids for the day (so he could come down)and man she is a rockstar.  They had watched the kids while we were there.

Justin went into surgery March 5th for his tumor removal.  Dr. McCue was his surgeon and had removed 99% of the tumor and wanted the radiation and chemo to take care of the rest so he wouldn’t damage his right side mobility.  Along side of me on surgery day was my sister Mandi, Uncle Rick, Auntie Brenda and Ariana.  When I felt an ounce of doubt, my sister would pray the second I asked her too.  That power of prayer had ease any scary thought in our mind.  When Justin came out of surgery, he still had amazing strength which surprised us all.  Dr. McCue had said he may lose temporary strength on his right side due to healing, to our surprise he really didn’t.  He kept asking for me, which made me melt into a million pieces.

We were back home in a day and a half.  Justin was recovering amazingly.  He was excited to be able to keep his hospital socks so him and our other son Owen could have matching socks. We came home to so much love and support.  Justin has been on the Crosby Fire dept for 14 years and loved every minute of it.  It’s hard to sit and watch my husband not be able to run out the door when the pager goes off.  He misses fighting fires with his buddies.

When COVID hit and our favorite professional sport was cancelled Justin almost died! The love that he has for the Minnesota Wild is like an affair, he never misses a game.  He would nap during the day just to watch the late games cause they mean that much to him. Also with COVID, the Dr. felt safe enough to have him only start with radiation first 5 days a week for 6 and a half weeks and then do the chemo at a later time. Before starting chemo we had met Justin’s Neuro Dr. and showed us his new MRI scan.. The cancer was gone. Radiation had zapped all of the rest. Praise the lord!

Looking at the scans that Justin has to do every 2 months always worries us.  You never know what the outcome will be. The first  scan he had, the Dr was impressed.  The second scan, Justin’s scar tissue had tripled in size making the Dr. a little nervous cause scar tissue is very vulnerable to getting the cancer back. We just keep on looking at the positive, we still have each other and that is all that matters.  As I’m writing this Justin has started his last round of his 6 month chemo treatments.  We will see the neuro Dr on November 19th, to get a scan once more and then a plan of action if one needs to be taken.  Prayers would be much appreciated that day.

Rewind 10 years, Justin lost his mom to Glioblastoma on his 29th birthday.  This was right at the beginning of our marriage. From the time the Dr. found her cancer until she passed was maybe 4 months. When this all began we could have felt and been defeated by this, but instead we praise God for all the glories he has blessed us with.  Don’t get me wrong, the struggles are real but praying and having our peers pray for us helps us get through the trying times.

We want to thank everyone for all they have done for us.  With you all it’s helped ease the pressure of life off our shoulders a bit.  Thank you Jacque and Jared for all the help you have provided for us.  We truly appreciate it. We want to thank our friends who helped split wood and stack it for us.  We cannot thank you all enough for that.

We have 3 beautiful children, 2 dogs and here we are. Only god knows our journey and it’s been tough some days but we still have each other. Joking everyday and loving life even more.
During the month of November a portion of the proceeds from shopping all INDY gear and apparel will go directly to Justin and his family. Shop now and be sure to mention his name in the comments section at checkout.
You may also donate and 100% will go to Justin and his family.
DONATE